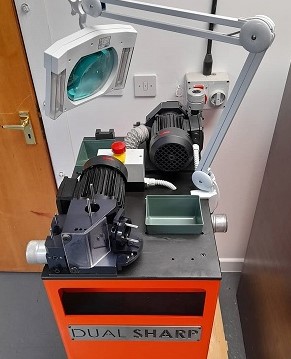 We are always looking out for and investing in new machines. So, we’re really excited to have received delivery of our new ‘toy’ a ‘dual-sharp’ device which is specially designed to keep the cutting tools and needles, which drill the holes, perfectly sharp all of the time. We just need to cable it up and sort out some extraction and then we’ll be up and running, learning new skills and, hopefully, making even better buttons as a result! 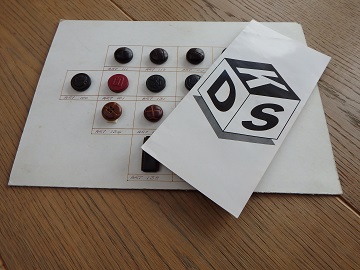 In between lock-downs in the summer of 2020, we came to hear about another ‘once-in-a-lifetime opportunity’ and wanted to tell you about it.

DKS Trimmings Ltd based in the Rhondda Valley in South Wales was established in 1950 by Mr Frank Blowers. He was approached to make leather buttons for Marks & Spencer in ‘unlimited’ numbers and took up the challenge, growing the business at its peak to employ almost 40 full-time people. Upon his retirement in the 1980’s his son, Dennis, took over the reins.

Nearly 40 years later and approaching 80 years of age, Dennis was gripped in the depth of the Covid pandemic. He was still making buttons in small runs into 2020, but with lock-down and various other issues, he found he had no choice but to ‘call it a day’. With no successor in line, things looked bleak.

The similarities between our interest in James Grove & Sons Ltd back in 2013 and DKS could not have been more striking. For once again we were facing the potential extinction of a specialist button making branch in the UK and so we agreed on the spot to do something. How could we not get involved?

It has taken quite a while, all things said and done, for Dennis to unwind 70 years of production and ready the machines for delivery to us in Bourton-on-the-Water. But on Wednesday, 10th March it happened.

It may take us a while, but we have taken the first steps on this new journey. Please don’t expect any leather buttons to be delivered any time soon, though. Setting up and learning this craft will take time – months, we expect. But we’ll drop you a line from time-to-time telling you how we are getting on. Exciting times. 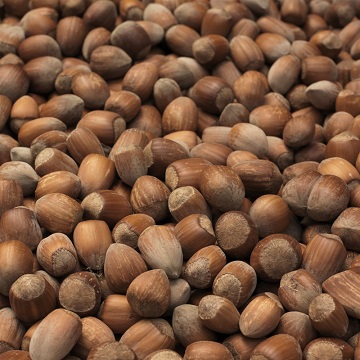 We first started donating nut trees to community gardens in 2020 as a way to off-set the carbon foot-print involved in importing tagua nuts from Ecuador – our first trees were panted last autumn. Well, with the planting season upon us, we have been back in touch with our supplier (Kentish Cobnuts) and have donated two more nut trees to keep the momentum going. Indeed, a cobnut tree is on its way to a community garden at Chinnor in south Oxfordshire, while another walnut tree is being planted in the garden of a community shop in Bledington, Gloucestershire. The great thing is that once the tree is producing nuts, they will be on-sale in the shop. How about that for zero-food miles? Many more donations to come – so, please do let us know if you have any suggestions as to worthy possible recipients. We’d love to hear from you.