All of us at Courtney & Co wish to thank everyone for their kind and on-going support. It is really appreciated and has allowed us to do so many new things. In fact, we have had a busy year, but it is only looking back that we realise quite what we have been up to. For over the past 12 months we launched buttons made of Codelite® (milk casein) after a 45 year gap in the UK; added a range of 18L shirt buttons; extended the range of tailoring buttons to include 44L coat buttons and even made some horn buttons! We have much more to do and look forward to developing our range in 2019. Hopefully, it will be the year when horn buttons will be commercially produced once more.

To do so, we are investing in new machines and premises and aim to launch the ‘James Grove Heritage Centre’ in which we aim to showcase much of the company’s heritage that we acquired 6 years ago together with more material we have obtained since. The new centre will also serve as a place of reference for people to come and inspect old pattern books and dies, understand the art of button-making and find out more about a company that was once the largest horn button maker in the world.

But for now we wish everyone a Merry Christmas and a happy, healthy, prosperous and peaceful New Year 2019. 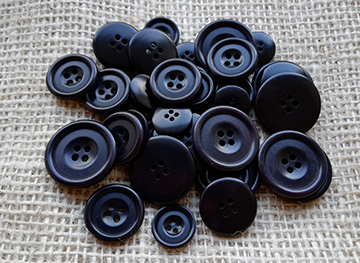 The Classic 564 Button by James Grove

Almost exactly six years ago to the day, James Grove & Sons Ltd went into administration. It brought to an end 155 years of button-making by the company and saw the closure of the iconic ‘Bloomfield Works’ in Halesowen. It was a sad day also for the company’s staff who, just days before Christmas, were told that their services were no longer required.

One of James Grove’s most classic of buttons was the 564. It was a 4-hole (a 2-hole version, the 563 was also available) button with rolled rim and a centre dimple. The pattern can be traced back to at least the 1930’s, but it came very much to the fore after the Second World War when it was adopted by many Savile Row tailors as the ‘button of choice’. The 564 (and 563) still held this accolade in 2012 when James Grove closed.

By using the icons in the top left-hand corner, you can swivel the button and even inspect it in various graphic forms never before seen. Do call or email us if you would like to help bring this classic pattern with all of its heritage back to life. What a great way to mark the anniversary of what was such a sad day in British button-making history!