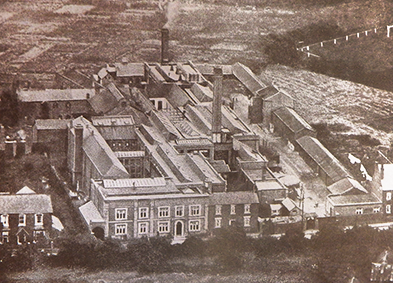 Button-making in the UK is a centuries-old craft and the reputation of its makers was widespread. As far back as the 16th Century, British-made buttons were traded by the merchant explorers of India, Cathay, the Spice Islands and beyond in exchange for exotic goods.

The industry flourished to the point that William Hutton, the historian, commented that the button-makers of Birmingham alone manufactured buttons of ‘infinite diversity’. At its peak, there were literally dozens of button-makers in the UK. By the mid-1960’s this had declined to around 50.

One by one, they closed as cheaper imports and a move to global sourcing took their toll. Despite a worldwide reputation for the highest quality buttons it produced, James Grove & Sons Ltd closed its doors in December 2012 for the last time after 155 years of family ownership and operation. It was the last of its kind. For a while, it seemed as if the British button-making industry died with it.

The loss of so many venerable names in British manufacturing over the years has always been a source of great sadness to us. Not just firms, but entire industries have vanished from our industrial landscape. Skills, sometimes honed and passed-on over generations are lost forever; our industrial heritage is weakened and people’s lives change forever.

So, when the opportunity presented itself for us to revive the manufacturing of natural buttons in the UK we jumped at the chance. Enthused and guided by a romantic and nostalgic desire to bring back to vibrant life what was once a great industry in the UK, we have invested in machines, materials and taken on experienced button-makers who could practice and pass-on their skills.

It wasn’t as easy as we had hoped. In fact, we spent over three years just harnessing the necessary resources, finding premises, talking to potential customers and learning ‘the trade’.

But in late 2016 we started making buttons and have plans to grow and expand our range to cover more genres, materials and patterns.

We still have a long way to go, but with determination and a little help from our friends and customers, we think we can make it. And, if we do, it will all have been worthwhile.

Our ambition is to follow in the footsteps of our predecessors and make the finest buttons based upon the following guiding principles. These are to: